To see a vortex of migrating cranes in western Nebraska, go to


Millie and Roy returned on May 4th and began incubation on May 12th, but the eggs did not hatch. They foraged and danced often during the summer (see video below) and then departed on migration on August 29th.


Posted by Christy Yuncker and George Happ at 4:47 PM 1 comments

The Early Life of Pi

For the Early Life of Pi, go to Pi's homepage.

A pair of sandhill cranes, who we know as Millie and Roy, has nested on our property for over a decade. Christy Yuncker Happ has watched, kept a written journal, and photographed Millie, Roy, and their colts through every day of 10 nesting seasons. They hatched 11 colts and fledged 7.

In 2013, Millie and Roy returned from migration to a snowy pond on May 8th. They began incubation on  May 18th.

Pi hatched on June 16th, fledged on August 8th, and migrated with Millie and Roy on September 8th.  Over 13 weeks, Millie and Roy coached Pi to dance, to run and wing-flap in pre-flight training,  and to learn the social cues for flying in tandem.

Pi's progress as he foraged and learned to dance and fly is described in 15 gallery-segments of stills and videos. To view the Table of Contents, click on the image below. 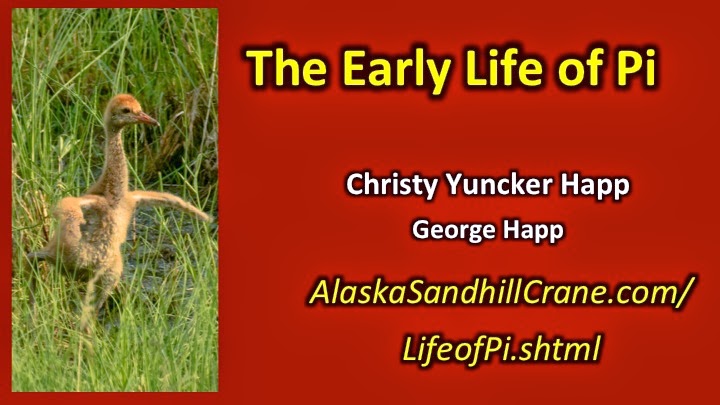 Posted by Christy Yuncker and George Happ at 10:30 PM 0 comments