Millie darts past Roy as he dances solo, focused. Two hundred and thirty days and over seven thousand miles since he flew south from this place with Millie and Oblio on a bright September morning in 2008.

One or two primary feathers are missing on Roy's left wing, showing that cranes replace their flight feathers one-by-one, even during a migration. Apparently the demands of nesting and fledging in the short summer season at 65 degrees North allow no flightless "down time" when all feathers could be regrown simultaneously (see Rowher link).

The Quicktime movie below shows some of the steps in Roy's jumping turn, or tour jete. For more of this dance, see Christy Yuncker Photo Journal.


Gulls harassed the crane pair as they settled in. Other crane couples and single intruders threatened the territory but Roy and Millie held firm. The pair meticulously inspected the bog for a week. Repeatedly, Roy picked up grasses and twigs (below, left) and gently initiated nest building but Millie vacillated. They mated several times. 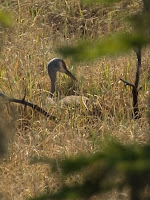 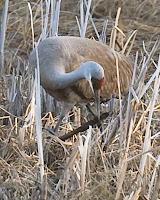 Then on May 9, though a narrow opening between spruce trees, far across the cranberry bog, we saw Millie sitting in tall grass (above, right). Tedious incubation duties alternated every 3-6 hours for 30 days, with Roy's shifts tending to be longer. He did not dance throughout incubation, but during respites off the nest, he frequently called. When a crane answered from across the valley, Roy flew toward the response and was absent for a few hours. 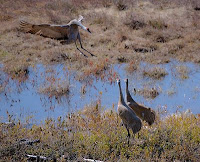 On at least two occasions a strange crane landed on the bog while Roy was absent. Millie came off the nest, calling as she confronted the new crane. Roy reappeared quickly, flying from across the valley and landing with legs forward in kicking-attack mode directed toward the interloper on the far right in the picture. The intruder flew away immediately and unison calls followed.
Neither crane left the nest vicinity on June 9 or 10. On the evening of the 10th, Roy walked from the nest area to the center of the bog, fed briefly, and broke into by a short energetic dance. He repeated the performance early next morning.
Minutes later, we spied the heads of two minuscule crane colts, barely visible as they stumbled 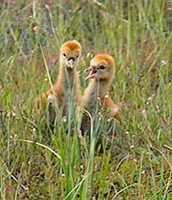 through the sedges and cottongrass, waving their stumpy wings. The family of four now prospects for food among pinkish low-bush cranberry blossoms and white laborador tea. After a sedentary month, the adults have become harvesters, seizing juicy caterpillars and adult dragonflies and even birds (see next post) that can be dismembered and brandished gently to the vocal colts we named Jacques and Phyl.
Posted by Christy Yuncker and George Happ at 8:46 PM