We can't readily investigate memory mechanisms by implanting electrodes into the brains of free-flying wild birds. But we can indirectly address questions about the mental capacities of wild birds by invoking laboratory research on people and other animal species. 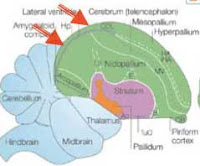 For birds as for mammals, spatial data is stored in the hippocampus and associated parahippocampus, indicated by red arrows in the diagram of the bird brain1.  In humans, the parahippocampal regions of the neocortex are implicated in spatial memory and navigation. The hippocampus is important for homing in pigeons2 and caching of food items in many avian species2,3. It is likely that the similarity in localized function reflects similarity by descent from their ancestral stem amniotes.  Fish also  store spatial information (including perhaps a cognitive map4) within their lateral pallium5, a brain region homologous to the hippocampus. 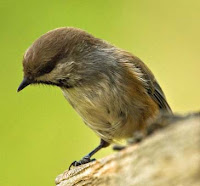 When Crows, Rooks, Jays, or Chickadees hide food tidbits for later retrieval, information about each item and its location is stored in the hippocampus.  The storage capacity is prodigious; tens of thousands of cached items are held in memory for later retrieval.  Items with limited "shelf life" (dead juicy caterpillars) are distinguished from durable items (acorns or peanuts)6.

Meticulous neuroanatomical research has shown that this region of a bird brain has an unusually regular architecture. The nerve cells are not randomly scattered but instead are clustered in patches or stripes that are reminiscent of the mammalian visual cortex7.

How is the data organized in the bird hippocampus?

At present, there are no data to directly answer this question in birds. For the present purposes, we'll look at on two of the many alternatives.

The Flat File might recommend itself as a bird memory mechanism because it is scientifically reductionist. It is built from individually learned stimulus-response pairings - the classical learning paradigm that has been validated by many thousand pigeon pecks on keys in Skinner boxes.  It assumes no high-level cognition by the bird. This pairing of item and response must somehow be coupled with a mental mapping coordinate system that seems hard to build from the Skinner-box assumptions.

We suspect that from the perspective of a computer programmer, the flat file would be viewed as a robust and adequate memory mechanism. But it is a very clunky solution.

The second alternative could stem from the architecture of the brain.
If cranes have a PPA that is homologous to mammals, then we suggest that the crane's PPA, a localized special cognitive center to recognize objects, could work in concert with grid cells to be the situs of environmental reference information.

We propose that maps in the crane PPA could accrue through experience and would be subject to updates and remodeling as the environment changes. Furthermore, they would provide a stable context to asses objects as they enter the visual field. Crane PPA mental maps could function at several scales, from the global scale as guides for seasonal migration to the local scale as a reference to register novelty. For Millie and Roy, that mental map might provide a reference picture which reveals novelty that augers threats.

As we enter the 21st new century, scientists are beginning to understand brain mechanisms that are linked to our human minds. Ignorance of the bird mind is even more profound.

Insightful research on human brains, like that from the Kanwisher laboratory12, offers striking perspectives on brain function. There are intriguing parallels for the neuroscience underlying bird behavior.
============


The mental item-and-response list could have fields, for example Stimulus-Object, Location, Compare-to-memory, Response that function like a name-and-address list.  In the Table below, we use arbitrary numbers for Location Coordinates.
This Flat File database (an Excel Spreadsheet) can be built from a well-accepted learning paradigm in experimental psychology labs.   However, the explanatory table glosses over the "Coordinates"; perhaps this memory model also requires a series of fields to specify each location for each object, and therefore a much larger flat file.