Death, visitations, and dance of "solidarity"

Twin colts, Jacques and Phyl, had trailed their parents around our cranberry bog for almost three weeks since hatch on June 10th and 11th. 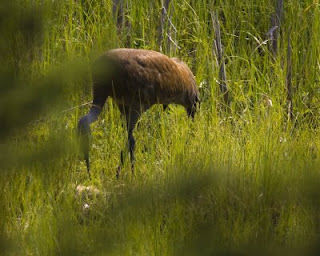 When we glanced at Cattail Point on that morning of July 2, we saw only Jacques running back and forth between his parents, begging for food. The adults flapped their wings twice, peered down at a tawny mass half-hidden in the grass, preened, and shuffled around. After careful examination through a spotting scope, we saw that the object of their gaze was Phyl's motionless body. The photo to the left shows Millie looking down at Phyl.

Sandhill Crane colts are intensively tutored from day 1. For their parents, summer school teaching is a 24/7 job. The three core subjects (crane versions of the three R's) in Colt School are: Foraging, Display/Dance, and Flying, each of which addresses biological imperatives: nourishment, socialization, and migration. We think of the 14 days after hatching to be crane kindergarten, when the curriculum stresses Foraging first and Display/Dance next.
Read more »
Posted by Christy Yuncker and George Happ at 7:45 PM 0 comments 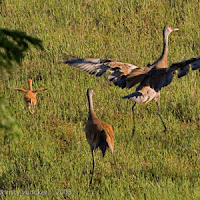 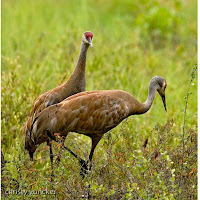