In 1958, one of the Blogauthors (George) chose Cornell University for graduate study in bird behavior and animal communication. I was intrigued by three kinds of signals:
Chemical signaling was the emerging field, but searching for avian pheromones appeared to hold little promise.  Pierre Grassé's Traité de Zoologie3, the zoologist's Bible of that era, stated that most birds are anosmic, without a robust sense of smell.

Thus I opted to do my doctoral thesis on insects when I changed advisers in 1959.

What a difference a half-century makes!

What data argue that birds use pheromones?

2. Birds spread these secretions upon their feathers when they preen.

3. Exocrine secretions, especially those from the uropygial glands, vary according to age, species, season of the year, and hormonal state4-10.

4. Birds are far from anosmic. Bird brains "have the right stuff" to distinguish odors.
5.  Birds use their sense of smell, for example: to find food, to distinguish individuals from one another, to recognize nest sites (petrels), and for many other purposes5. Three notable examples involve mating.
6.  In 2010, the molecular components of sex-specific odorants were identified in the oils from uropygial glands.
7. Recent papers document individual recognition by scent in humboldt penguins35 , petrels36 and zebra finches37 .
8.  A 2013 paper38 strongly suggests that male satin bowerbirds paint their spectacular bowers with chemical signals.  The paint is attractive females who taste it.

Birders have logged millions of hours watching birds. How could pheromones escaped their attention for so long?


We think that the answer is threefold:

= First, because birds don't wave mobile pendulous snouts as they walk about.
In a seminal article, Samuel Caro and Jacques Balthazart argue persuasively for the existence of bird pheromones. These authors suggest that birds aren't obvious when they use chemical signals:

"Mammals extend their neck, move their head, sniff, and track the source of the odor.....Birds, in contrast, have developed a wide array of alternative communication signals and do not show behaviors typically associated with olfactory sampling..." 5 (italics added).

= Second, because most of the accumulating evidence1has been published in biochemical publications rather than the birder journals that are read by most ornithologists.

= Third, because it takes a lot of expensive scientific slogging to get from observation and experiment in the field and laboratory, to purification of the molecules, to behavioral assay, and finally to manipulating physiological context, all of which must come together to definitively prove pheromone function.

The roles of pheromones can be obvious or subtle.
Pheromone research starts with observations of behavior. Let me digress by presenting a personal example:

In 1969 after several years of behavioral experiments, George and his students concluded that mealworm beetles use multiple sex pheromones18, 19 (diagram left): A) an attractant produced by male beetles for females; B) a substance from females that excites males; C) an antiaphrodisiac produced by males that inhibits other male competitors, and  D) primer pheromones that accelerate oocyte maturation in females.

Next, the behavior needed validation by chemistry. But my laboratory and other colleagues failed in attempts to chemically purify even one of these four putative pheromones. So instead, after 1970, we pursued research themes in cell and developmental biology.

In ensuing last 40 years, our conclusions, based on behavior, have been validated by the work of chemists. In 1986, a Japanese group identified B, the female beetle's attractant20. Recently (2005), an English group isolated A, the male's attractant21. Since the existence of antiaphrodisiac C and primer D have not been definitively confirmed by isolation and bioassay of a pure substance, the case for each of these is yet incomplete.
The case for pheromones in Sandhill Cranes

Three lines of evidence strongly suggest that cranes use pheromones:

=First - Cranes have capacious uropygial glands that secrete a melange of oils and waxes. The drawing to the right is the uropygial gland of a Sandhill Crane22.  In his classic inventory of uropygial secretions23,24, Jürgen Jacob found that crane uropygial secretions contain unusually large proportions of sesquiterpenes and diterpenes, substances built up from isoprene building blocks like those used to make steroids. Isoprenoids are auspicious pheromone candidates.

=Second - Every crane repeatedly harvests secretions of its uropygial gland (left, below) and wipes the greasy gue over their wing and body feathers (right, below) as it preens. 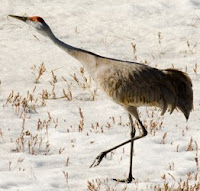 =Third - In nature, both crane sexes exhibit a fascinating exploratory behavior (photo to the right) as they pace forward just before copulation. It has been sketched for Eurasian Cranes by Paul Johnsgard25 (who called it 'parade march'). It has been named 'bill-raising' in Red-crowned Cranes by Masatomi and Kitagawa26, and included in most accounts of crane precopulatory rituals25-28.

In our Crane Display Dictionary29, we suggest that the 'Parade-march' can facilitate olfaction. 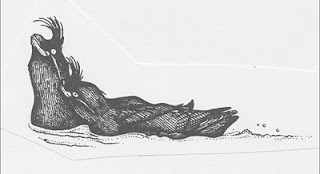 We agree with Caro and Balthazart that most species of birds "... do not show behaviors typically associated with olfactory sampling".5 However, there are exceptions where sniffing seems evident. We believe that two of the notable  exceptions are the Parade-march posture of cranes and the Ruff-Sniff behavior of Crested Auklets (seen to the right in a drawing from Hunter and Jones).30


Given these lines of evidence, we conclude that it is quite plausible that cranes emit and perceive reproductive pheromones. This idea deserves serious further investigation:

Posted by Christy Yuncker and George Happ at 6:15 PM 2 comments

Roy and Millie returned to their Goldstream Valley cranberry bog and its snow-covered frozen pond on April 22 -- Earth Day. The pair soon began exploratory nest building (left) and then started serious incubation as the snow fell lightly on May 4 (photo right).

We have seen cranes on this pond for 15 years. 2010 is the 10th year that we know a pair of cranes has nested here. Photographs confirm that Roy and Millie have been the individuals nesting here since 2004. We suspect they have been summer residents here since the late 1990's.

The first crane colt (Lucky) hatched on June 4, 2010 and a second (Chance) on the next day. They spent the first two days near the nest, being fed insects by their parents and otherwise sheltering under Millie's wings. 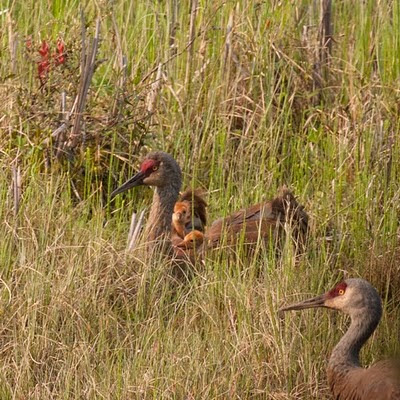 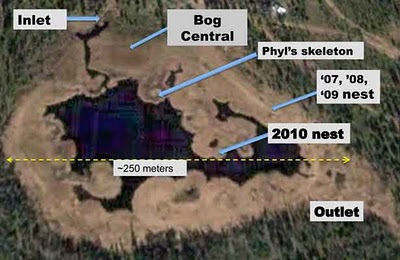 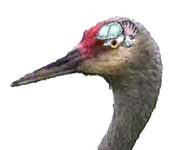 Cranes are members of Gruiformes - an ancient order of 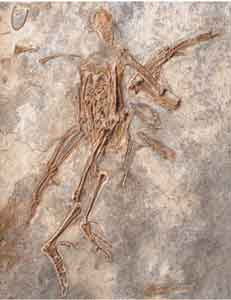 birds. One chicken-sized gruiform (fossil to the right) lived 30 million years ago on the grasslands of present-day France1. The famous ornithologist Alexander Wetmore identified fossil leg bones from the Paleocene prairies of Nebraska and Kansas as those of Sandhill Cranes from 7 million years ago2, an argument for cranes as the oldest bird species alive today. There are no fossil skulls found for these Paleocene Sandhills, but their brains, like those of modern birds, must have carried a legacy of adaptations acquired through natural selection over hundreds of millions of years.